Do boxing gloves hurt more than fists? No, they don’t. However, people tend to punch harder when using boxing gloves, because they think that it won’t hurt their partner as much.

Professional boxers use padded gloves when training and competing. If you’ve ever trained at a boxing gym, you’ve likely had to wear a pair of boxing gloves.

Bare-knuckle boxing isn’t even legal in most states, which may make you wonder why. Is it because it’s more lethal than traditional boxing? Or do boxers wear gloves because they allow them to punch harder?

Even when using MMA gloves, a different type of glove that doesn’t have an extra layer of padding, he punched harder, delivering 651 pounds of force.

Of course, this experiment has some severe limitations. After all, it’s only one person punching a bag.

Even if he were to hit twice, both times wearing the same gloves, there could be a noticeable difference in punching power, depending on his boxing stance, energy level, and footwork.

In either case, however, boxing gloves are for keeping your hands safe, not for punching harder or hurting your opponent more.

What Is the Purpose of Boxing Gloves?

The purpose of wearing a pair of gloves when boxing is to protect your hands. Whether you’re delivering a straight punch or another type of punch, you are more likely to break your fist or wrist if you punch with your actual knuckles.

In the bare-knuckle era, boxers always competed without gloves. Sometimes, though, they had extra padding in the form of leather straps.

That went out for thousands of years – fist-fighting has existed as a sport for at least 6,000 years in some form.

In the 18th century, though, John Graham Chambers published the Marquis of Queensberry rules, which specified the use of gloves with knuckle padding in boxing.

Competitions started to adopt those rules, and boxing gloves became widespread in modern boxing, including both professional boxing and amateur boxing.

Today, the main reason people wear boxing gloves is to protect their fists and defend against punches. A bare-knuckled punch is more likely to cause significant wrist or hand damage.

Do Boxing Gloves Allow You To Punch Harder?

A boxing glove punch isn’t necessarily more powerful than a regular punch. However, since there is less of a risk for self-injury, many people end up punching harder when they have protective gear to protect their hands, knowing the padding in boxing gloves will keep them safe.

One study by the Washington State University, which was more comprehensive than the Bas Rutten experiment, found that boxers could deliver almost 28 percent more power to their punches when using modern boxing gloves compared to punching bare-knuckled.

For many people, wearing gloves incentivizes them to punch harder, thus increasing the chance of injury, including more severe injuries like brain damage. Even 6-8oz gloves, which are on the lighter side, allow you to punch hard without hurting yourself.

You are also less likely to punch your opponent’s head if you are not wearing gloves. In addition, due to the broader surface area of boxing gloves compared to mixed martial arts gloves or bare knuckles, they are more likely to cause brain damage.

Bare knuckles, though, are more likely to cause surface damage, such as cuts.

Do Gloves Allow You To Defend Yourself Better?

Yes. Another purpose of gloves in modern boxing is defense. You can block with your thick, heavy gloves when someone throws a punch at you, thus protecting your face from impact.

If you are fighting bare-knuckle, that is quite difficult. Your hands are not nearly as good at blocking punches as gloves, and the risk of injury is much greater.

Why Is Bare-Knuckle Boxing Illegal?

With what we’ve said above about how bare-knuckle boxing can be safer for your opponent, why is it illegal in most states?

Most likely, it’s because the sport of bare-knuckle boxing is rather gory and bloody. As I said, you’re more likely to cause cuts and surface damage, and the sheer violence involved scares many people.

People consider bare-knuckle boxing to be barbaric, but the truth is that it is often safer than regular boxing.

Yes, there is a more significant risk of a hand injury, but there is also a lower risk of brain injury to your opponent. And, while you can heal a broken hand in a month, you can’t heal lifelong traumatic brain injury.

Like bare-knuckle boxers, Lethwei practitioners do not use gloves. Instead, they only use tape and gauze to wrap their hands. Most people consider Lethwei one of the most brutal and bloody martial arts, much more so than bare-knuckle boxing.

Lethwei is different from bare-knuckle boxing in a few ways. First, it allows you to attack with kicks, knees, and elbows, while traditional boxing does not. In that sense, it is similar to Muay Thai.

However, Lethwei takes things a bit further and also allows headbutts. Yes, Lethwei practitioners use their heads to attack their opponents.

That’s why bare-knuckle boxing is still a lot more popular than Lethwei, despite being a niche martial art itself.

There are only so many people who are willing to risk the long-term brain damage you’ll sustain as a result of butting your opponent’s head with your own consistently. Bare-knuckle boxing, by comparison, is pretty safe.

Should You Train in Bare-Knuckle Boxing?

There are some benefits of training bare-knuckle once in a while – at least, hitting the mitts or the punching bag without gloves.

First, it forces you to be more methodological and calculated in your punches. Because you don’t have a thick layer of padding to protect your hand, you must perfect your punching form and technique, or you’ll put yourself at significant risk of injury.

When you punch the bag without gloves, you can’t afford to have the wrong form. You will also get a better view of your wrist and hand and ensure they are straight.

Furthermore, it forces you to land the punches with your knuckles, something many beginners fail to do when training with gloves. Rotating your hand before impact can help ensure your knuckles are touching the bag.

At first, bare-knuckle punching will hurt a lot. Boxers typically refer to this as “knuckle conditioning.” Over time, your knuckles will get used to the impact, and it won’t hurt as much. Still, you should train bare-knuckle sparingly, as your knuckles are bone, not muscle.

Bones don’t get stronger just because you keep damaging them; they’re not muscles. When training bare-knuckle, you should focus more on speed and form than power and strength, lowering the risk of injuring your hand.

However, bare-knuckle sparring is a whole different story, and you should not do that unless you plan on fighting bare-knuckle. If you will have a bare-knuckle fight, you must spar bare-knuckle as well.

Remember, gloves allow you to defend against punches in a way that bare hands do not. Therefore, when fighting bare-knuckle, you have to use other defensive measures more often, such as slips, ducks, and rolls.

Furthermore, you have to be more careful with how you punch your opponent. In a regular boxing match, you might get away with using the improper form as long as you wallop your opponent.

In a bare-knuckle match, you could seriously injure yourself, putting yourself out of the game. You may even have to stop competing for weeks until you get better.

Boxing gloves don’t necessarily hurt more than fists, although people tend to punch harder when boxing with gloves, knowing they aren’t at risk of breaking their fists. However, bare-knuckle punches may cause more surface damage, including cuts and bruises, thus hurting more in the short run.

At the same time, gloved punches are more likely to cause brain damage. There are several reasons for this, ranging from people being more likely to take shots at the head to the fact that gloves cause damage over a wider surface area.

All in all, bare-knuckle boxing remains a niche sport that isn’t yet legal in most of the country. 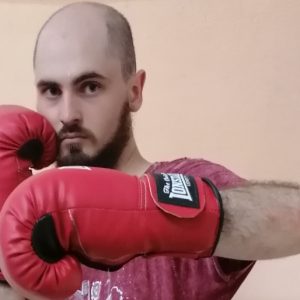 Velin has been practising martial arts for over 17 years. For the past two years, he's been using this website to share his experience with people all around the world!
PrevPreviousCan a Punching Bag Help With Anger?
NextNino Bernardo’s Seminar, from a Bulgarian’s Point of ViewNext

Manage Cookie Consent
To provide the best experiences, we use technologies like cookies to store and/or access device information. Consenting to these technologies will allow us to process data such as browsing behavior or unique IDs on this site. Not consenting or withdrawing consent, may adversely affect certain features and functions.
Manage options Manage services Manage vendors Read more about these purposes
View preferences
{title} {title} {title}